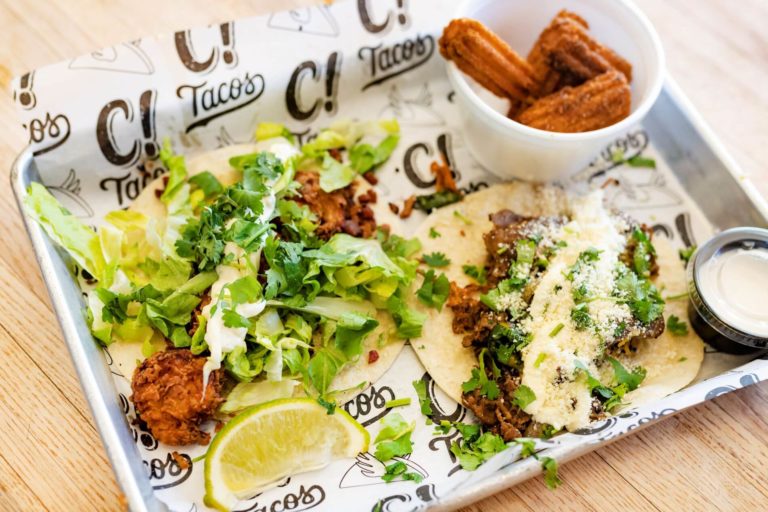 You can read the full online version of the article on the QSR website by clicking here.

Capital Tacos is looking to expand into markets across the country with a new franchise opportunity launching in January 2022.

Founded in 2013, in a 1,000-square-foot, sign-less storefront in the Tampa suburb of Land O’ Lakes, Florida, Capital Tacos quickly garnered local and national attention and numerous awards. Capital Tacos has five locations throughout Florida, each with its own unique personality but the same cult-like local following as the original location. Capital Tacos has no desire to make each of its restaurants operate and feel the same as the others. Instead, the company actively seeks out former restaurant locations that it can ‘transform’ into Capital Tacos.

Across all stores, parents teach the next generation how to play on retro pinball machines in the dining room, and families create life-size chalk drawings together on 100-foot chalk walls. Stores also feature funky murals made entirely out of bottle caps (collected by each store from the sodas it sells) and chairs hanging from the bathroom walls as lamp holders (an homage to the original store ‘hack’ to get some lights going in the bathroom there).

“Keeping true to our roots and where we came from—and embracing our eccentricities and differences rather than running from them—is simply who we are,” says James Marcus, operating partner and co-owner. “Our customers appreciate that we are for everyone, and we are like everyone. Our guests know what they get from us: authenticity. What you see at Capital is what you get.”

“Capital Tacos is more than just a scratch kitchen; it is truly a foodie paradise,” Luger says. “Nothing is served from a steam well at Capital; everything is grilled up to order. That sounds simple but virtually nobody else takes this approach, and the impact on the taste of the food is simply massive.”

For the guest, there is no going down an assembly line pointing at ingredients and guessing what tastes good together. The menu has plenty of options they’ve created to specifically balance savory, sweet, spice, and mouthfeel that creates a Tex-Mex umami burst of flavor.

“At a ‘real restaurant’ you trust the chef to use their skills to make something delicious,” Marcus says. “We don’t accept—like others seemingly do—that culinary expertise doesn’t belong in a fast-casual restaurant. Every dish we serve has been created by a chef, not a random walk-down a steam table line.”

Seasonal and limited-time specials also drop regularly, inspired by global cuisines, national holidays, and local events. For example, local celebrities (such as Tampa Bay Lightning/NHL players Victor Hedman and Ryan Callahan and WWE Superstars Baron Corbin and Jinder Mahal) have regularly partnered up with Capital Tacos on special tacos for special causes, with a portion of proceeds of those taco sales going to that celebrity’s charity of choice.

Just last week, Capital Tacos launched #FLORIDAMAN, its Cajun Fried Gator Taco, for one day only. It was the company’s most popular special to date, selling out across its stores before dinner time.

“Capital Tacos is one of the very few restaurant chains built from the ground up to be a true foodie paradise. We are constantly experimenting with new ideas. Traveling the state and the country, and even the world, seeking out amazing cuisines and dishes that we can put our own unique spin on,” Marcus says. “We purposely don’t have a test kitchen; our chefs just constantly show up at our locations to test recipes. So every team member knows they are always on call to help invent the next great special or flavor profile. And our own guests are the ones doing the taste testing. Not some focus group sitting behind a glass or in some fancy focus group like our competitors.”

Luger and Marcus have known for some time they had something special.

“We’ve had literally hundreds of requests over the years—from guests who have visited our stores locally across Florida and from states across the country—asking if and how they can bring Capital to their hometown,” Luger says. “We’ve spent years with our heads down, building out and bulletproofing the concept before going back to these folks, as we are now, saying, ‘yes, you can’ and ‘here’s how.’ And the timing to do so is better than ever.”

On the technology side, Capital Tacos now boasts an industry-leading, fully-integrated tech stack, featuring a combination of the very best third-party platforms that are powering the biggest food brands in the world. These systems drive its Capital Rewards loyalty program (Punchh), direct online ordering (Olo), and mobile app (Koala), while other internal-facing systems enable its store managers to run a clean, safe, and efficient location.

Capital Tacos also boasts one of the industry’s most advanced proprietary, custom-built kitchen display systems—one that took years to design and build and is fully customized to its specific operations and menu. Capital Tacos is also available on all major third-party delivery platforms, and has specific new store launch incentives and programs set up with both DoorDash and Uber Eats.

As a result, its average topline revenue and operating margins put it at the very top of its peer group. Its stores have seen a double-digit revenue increase over 2019 performance, and a majority of the chain’s revenue is now digital.

“Thanks to our unique offerings and our investment in technology, the convenience and value we are able to offer guests in search of great food is through the roof,” Luger says. “We’ve seen a measurable and meaningful uptick in overall and repeat business by offering customers a best-in-class digital experience, along with the ability to fully customize their order, order, and reorder conveniently when and where they want and seamlessly get rewarded and surprised with exclusives through Capital Rewards.”

Capital Tacos’ unique approach extends to its franchising program. It believes many promising franchisee candidates are likely to come from its own employees already inside the brand, and thus Capital Tacos has rolled out financial support to accommodate that step for employees who wouldn’t otherwise be able to raise the investment capital.

Capital Tacos is also looking outside its own walls for new franchisee candidates. Luger says the brand is seeking qualified candidates from a range of backgrounds (though restaurant operational experience among each franchise group is “pretty much a must,” he says) and in markets across the country, starting with Florida, Georgia, South Carolina, North Carolina, Tennessee, Arkansas, Alabama, Missouri, and Louisiana.

With another highly unique program, if an otherwise qualified candidate does not have the liquid capital required to open a Capital Tacos but shows the passion and skill set needed to succeed, Luger says his team will work with that candidate to find a solution.

“We want great operators who will be spending their time in the store,” Luger says. “Our employees already have a working knowledge of the operations and a passion for the brand, so they are prime candidates. But we’ve deliberately kept our initial investment low, and we’ll be rolling out a number of financial support options to help under-capitalized candidates who are otherwise qualified to get on board.”

“Capital Tacos has chosen to grow via franchising not because we need the capital, but because we want our stores to be run by hard-working owner-operators, living and raising their families in the communities we serve,” Marcus says. “We believe that owning a Capital Tacos is a truly unique opportunity that can forever transform the financial lives of franchisees and their families. Nothing is more soul-filling and enriching than to be part of that.”

Franchisees will be supported by an “expert team of marketing and franchise specialists—people who are every bit as devoted to the success of our franchisees as we are,” Marcus adds.